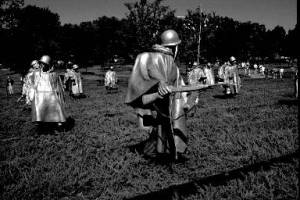 On June 25, 1950, North Korean forces invaded South Korean. Fulfilling our United Nations commitment, United States forces were immediately dispatched from Japan; first contact between U.S. and communist combatants was July 3. Between then and the truce July 27, 1953, 33,651 were killed in action, died of wounds, or died while captured or missing (at one time, over 8,000 were listed as missing).

This list of Kansas casualties was provided by Louis Linn.

There were a million in uniform around the world during the Cold War, about 350,000 served in Korea, many fought there, and these Kansans gave their lives. While Korea frequently is referred to as the Forgotten War, the families of these men will not forget them, nor should we.